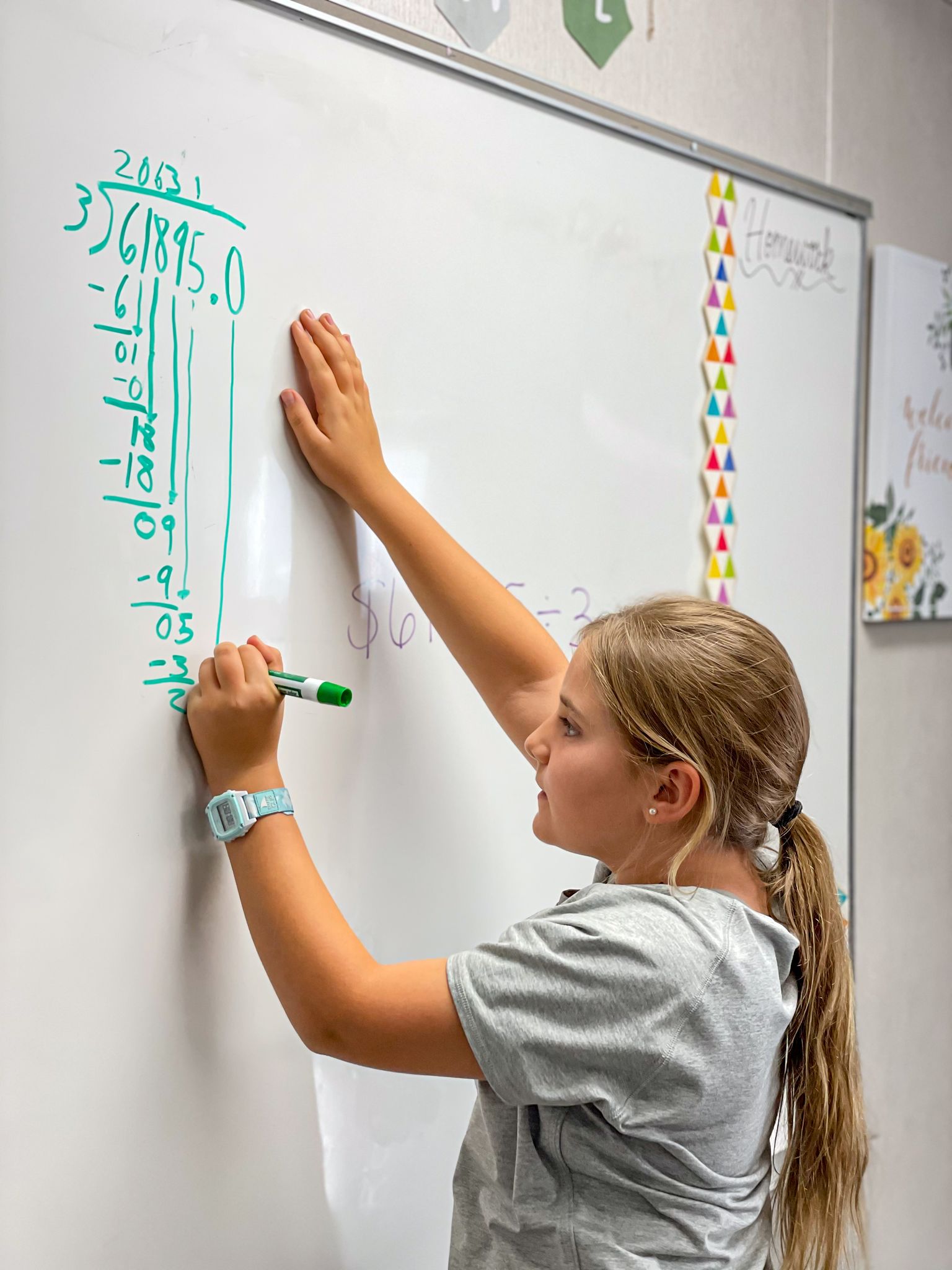 Classical education harkens back to the period of the Greeks and Romans, but that does not make it stuffy and antiquated. Statistics show quite the opposite. Classical education pairs a child’s learning to their natural stages of development. The Trivium, Latin for “the three ways,” forms the core of classical education. Derived from the Trivium are our three schools, Grammar, Logic, and Rhetoric. Through the Trivium students can naturally latch on to their education as it is designed in a way that hones a developmental strength.

Utilizing the classical methodology, students can enter the world of work, or the collegiate arena with the tools of learning, regardless of the material. We know that the “material” of a workplace will see profound changes over a 13-year educational journey. Researchers predict that over half the jobs available when students graduate in ten years do not currently exist. We prepare students to not only exist in the future job market but to be the highly educated, adaptable minds that helps design it.

The classical Christian education resurgence began in the early 1990’s following publication of the Douglas Wilson’s Recovering the Lost Tools of Learning: An Approach to Distinctly Christian Education (1991). In 2020 the Association of Classical Christian Schools (ACCS) commissioned a study by the University of Notre Dame’s Sociology Department to assess the impact of classical education. The results, revealed in the Good Soil Report (2020), favored completion of the ninth through twelfth grade program and deserve significant attention regarding student retention in classical Christian schools. The Good Soil Report reveals survey data that tracked the practices beliefs, attitudes, and other outcomes of alumni from five types of schools: public, secular preparatory schools, Catholic, evangelical Protestant, and religious home schools. Notre Dame statistically isolated the results of the survey to those caused by the school as opposed to those caused by the family or the church. By 2019 the ACCS has had enough graduates from which to draw a statistically valid sample and field the same survey through Notre Dame. The results show significant differences for alumni of ACCS schools. The report revealed ACCS alumni are “the most prepared for college and have healthy outlooks on life,” “continue and grow in their Christian faith and this impacts how they live their lives, particularly with marriage, church,” “and volunteering, and influence, independence, and commitment to traditional values makes them potentially the ‘saltiest’ of the groups tracked” (p. 52). The report’s use of the term saltiest referred to Jesus’ words recorded in Chapter 5, Verse 13 of the Book of Matthew (ESV, 2001).

The following graphs are three examples from the Good Soil Report. There are many more in the full report. 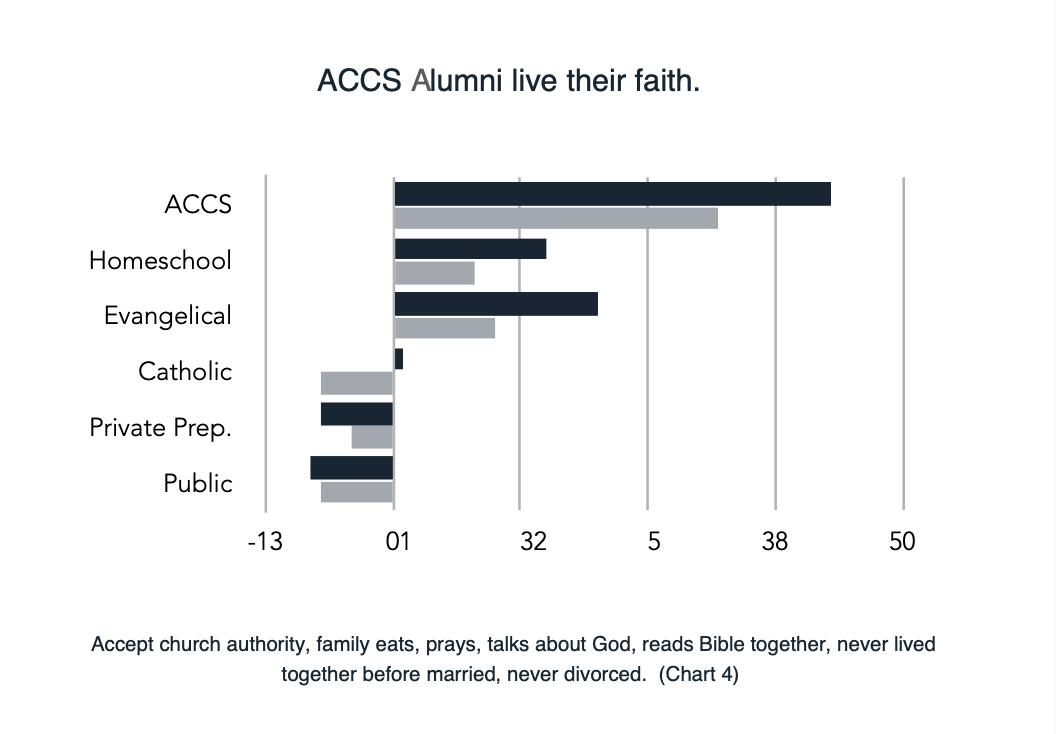 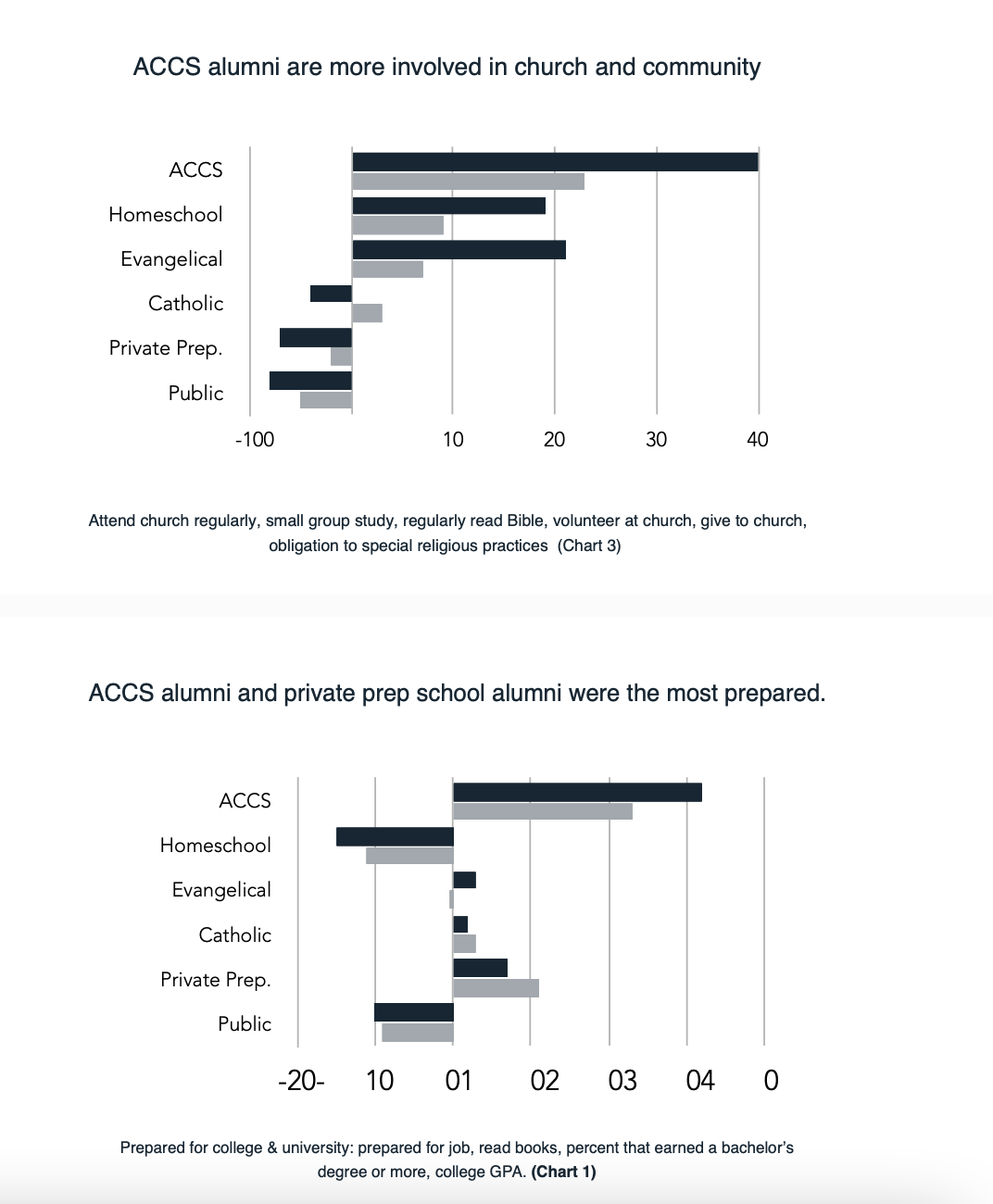 Students begin with the Grammar stage of education. Often through memorization, students are challenged with learning the basics of topics. At this stage children can retain vast quantities. Grammar School is Pre-K to 6th grade.

As students progress through the 7th and 8th grade, known as the Logic stage, they become naturally argumentative. Using their grammar knowledge, they learn how to debate with respect and dignity.

The Rhetoric stage of classical education includes 9th through 12th grade and focuses on the art of persuasive speech and writing. Students take everything they have learned and, through winsomeness, share learning.

The rhetoric school experience is founded upon the realm of wonder, reason, and community. On completion of the logic school, the end of the eighth-grade year, a student has experienced each of these attributes. However, each is incomplete, and each is immature. Just as the student himself is immature in the understanding of information.

“Education begins with memory and imitation” (Sayers, 1947). It culminates at Veritas in rhetoric school with “the cultivation of the trained affections” (Lewis, 1949) for a lifetime of reasoning, learning and wonder. The liberal arts were used to demonstrate something as true. Inevitably the culture of the school educates as much as its curriculum. Virtue and piety played a role in the pursuit of wisdom. Louis Markos, speaking in the Miseducation of America (2022) television documentary says, “Unlike values that are man-made, virtue is shaping young people in accordance with a standard that does not change from age to age.”

The tradition considers rhetoric as the culmination of the arts of language: it brings together key skills cultivated in grammar and logic for the purpose of creative and persuasive speech, and it also leads learning from the classroom, so to speak into the public square.