Students begin with the Grammar stage of education. Often through memorization, students are challenged with learning the basics of topics. At this stage children can retain vast quantities. Grammar School is Pre-K to 6th grade.

As students progress through the 7th and 8th grade, known as the Logic stage, they become naturally argumentative. Using their grammar knowledge, they learn how to debate with respect and dignity.

The Rhetoric stage of classical education includes 9th through 12th grade and focuses on the art of persuasive speech and writing. Students take everything they have learned and, through winsomeness, share learning.

Students at the grammar level (PreK through 6th grade) are ripe for honing their use of language and knowledge as foundational skills. We help students hone these skills by taking in new information, memorizing it, and reciting it through song, poetry, and chant. “Education begins with memory and imitation” (Sayers, 1947). Cultivating wonder and a love of learning in students at this age allows for them to appreciate their education in a different and distinct way.  Integration of content areas provides students with an opportunity to make connections that help them begin to build a deep core body of knowledge. Students at the top end of the grammar phase (6th grade) are preparing for their transition into the logic level of the trivium.

The second level of the Trivium is logic.  At Veritas, students in the 7th and 8th grades make up our Logic School. During these two years of education students will begin, as Clark & Jain state in the Liberal Arts Tradition, finding arguments, following questions, demonstrating reasons.  Students at this level have a tendency to be argumentative.  They tend to use the information they have learned in their studies to dispute. They love to catch others in error, especially their parents and teachers.  Instead of suppressing this tendency, we use it! Our teachers mold and shape students by teaching them how to question through informal and formal logic classes as well as through Socratic seminar.  As students master argument, questioning and reason, they are ready for the final level of the trivium.

The rhetoric school experience is founded upon the realm of wonder, reason, and community. Upon completion of the logic school, the end of the eighth grade year, a student has experienced each of these attributes. However, each is incomplete, and each is immature. Just as the student himself is immature in the understanding of information.

“Education begins with memory and imitation” (Sayers, 1947). It culminates at Veritas in rhetoric school with “the cultivation of the trained affections” (Lewis, 1949) for a lifetime of reasoning, learning and wonder. The liberal arts were used to demonstrate something as true. Inevitably the culture of the school educates as much as its curriculum. Virtue and piety played a role in the pursuit of wisdom. Louis Markos, speaking in the Miseducation of America (2022) television documentary says, “Unlike values that are man-made, virtue is shaping young people in accordance with a standard that does not change from age to age.”

The tradition considers rhetoric as the culmination of the arts of language: it brings together key skills cultivated in grammar and logic for the purpose of creative and persuasive speech, and it also leads learning from the classroom, so to speak into the public square.

This research seems to confirm what history has repeatedly demonstrated—classical Christian education can influence the course of a home, a community, or a nation. Understandably, some will view the results of this survey skeptically because of the significant differences between classical Christian schools and the others surveyed. These results can be understood more fully by visiting the ACCS schools themselves. 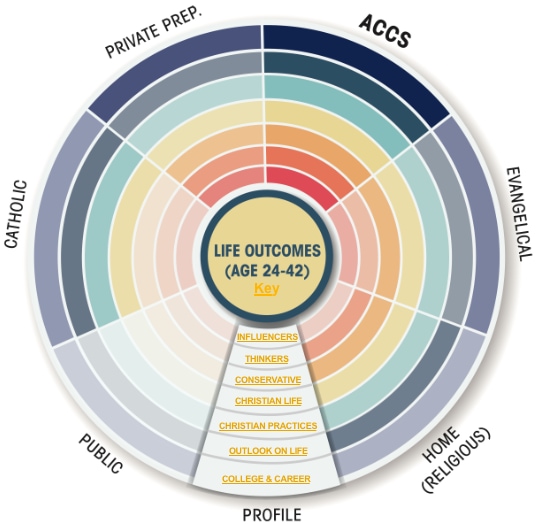