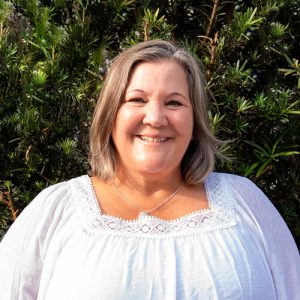 Jennifer Husk was born in Norfolk, Virginia, the child of a U.S. Naval officer, and traveled internationally for a good portion of her life. She and her husband of twenty-eight years moved to St. Augustine from Oregon where they were planting a small church. She earned her bachelor’s degree in physical education from James Madison University, Virginia. After graduating college, Mrs. Husk played golf professionally for five years and has even played in two Women’s U.S. Opens. She has taught golf clinics for various groups, given private lessons, and coached at the high school level for many years. She comes to Veritas with extensive teaching experience in first grade classrooms, as well as in kindergarten, third grade, and middle school in two other Christian schools, as well as in public schools.

Mrs. Husk became a follower of Jesus in her late twenties and she and her husband have spent the last twenty-five years serving together in church ministry around the country. They also served as missionaries in East Asia for nine years. Mrs. Husk enjoys going to the beach and reading a good book in her spare time.