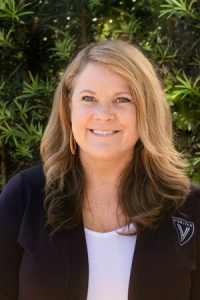 Emily Byrd grew up in St. Augustine and truly feels connected to the local community. After graduating from St. Augustine High School, she earned her B.A. in Psychology from Stetson University in Florida. She spent the next several years working as a Social Services Counselor for the Department of Juvenile Justice and later for the Department of Children and Families. After three years of social work, she moved overseas with her husband who served as a pilot in the military. While living in Germany, she taught at a K-2 Montessori school and discovered her calling to teach. Upon returning to the United States, she returned to school to complete her post-graduate certificate in K-6 Education. Mrs. Byrd has over 15 years of teaching experience at multiple grade levels, 10 of those years as a Classical Christian school teacher. Mrs. Byrd has been with Veritas since it was just a concept that God had laid upon the hearts of the founding members. She is excited to continue to be a part of its growth and has truly enjoyed having both of her children attend Veritas. Mrs. Byrd and her family love spending time at the beach, exploring our beautiful city, and are very involved in their church and the community.