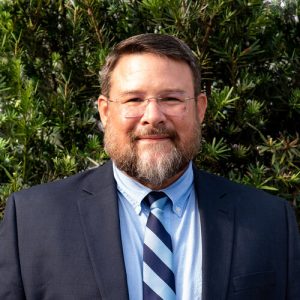 Wayne Husk joined Veritas in the latter half of the 2020-21 school year when he taught various subjects for our sixth and eighth grade classes. An ordained minister, he has served for the past twenty-five years in various capacities on staff in churches up and down the east coast, as a church plant pastor in the Pacific Northwest and as a missionary in East Asia for nine years. He studied Mandarin formally while overseas and also taught a few semesters of American history and conversational English at a Chinese university. Mr. Husk is an avid student and teacher of the Bible who received an undergraduate degree in Biblical Studies and a Master of Arts in Intercultural Studies from Southeastern Seminary in Wake Forest, North Carolina. Originally a Maryland native, Mr. Husk and his wife of twenty-seven years are excited to have put their empty-nester roots down along the beautiful east coast of Florida. He enjoys history, playing guitar and leading worship, fishing and reading theology and hopes to someday write some of his own curriculum.